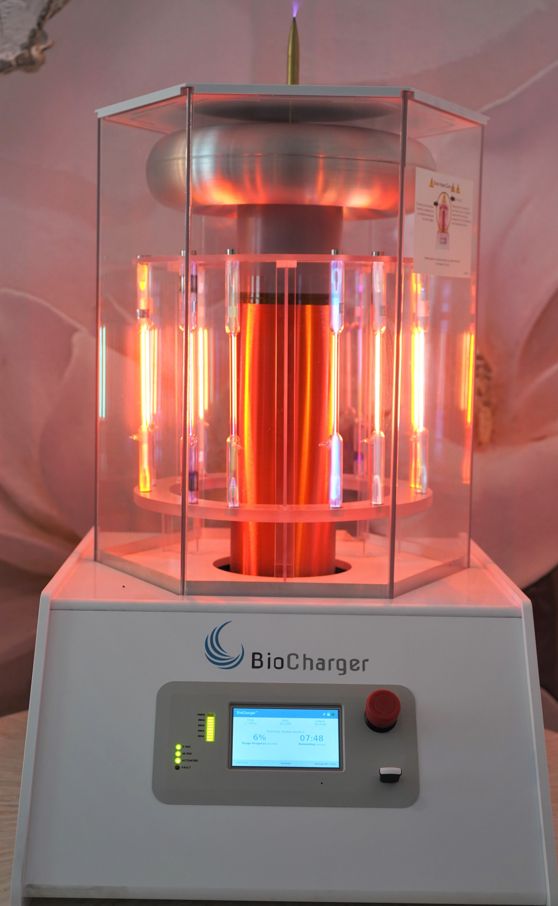 The BioCharger is a hybrid subtle-energy revitalization platform. The transmitted energy stimulates and invigorates the entire body to optimize and improve potential health, wellness, and athletic performance. The BioCharger is completely non-invasive, and has proven to restore strength, stamina, coordination, and mental clarity.

BIOCHARGER® The BioCharger NG is a hybrid subtle-energy revitalization platform. The transmitted energy stimulates and invigorates the entire body to optimize and improve potential health, wellness, and athletic performance. The BioCharger NG is completely non-invasive, and has proven to restore strength, stamina, coordination, and mental clarity. This technology represents more than 25 years of research, development, and validation that builds upon more than 80 years of documented research by internationally acclaimed scientists and early energy healing pioneers such as Nikola Tesla, Georges Lakhovsky, and Royal Rife. It is the world’s first software-based, solid state, mobile & cloud compatible, high voltage, multi-frequency, resonant transformer (modified Tesla coil) that wirelessly and simultaneously transmits pulsed waves of electromagnetic, electrodynamic, and photonic energy. The BioCharger NG embodies a revolutionary technology when compared to the antiquated analog technology of existing Rife machines, multi-wave oscillators, and various light therapies. The result is a precisely controlled radiant energy field that wirelessly delivers the energy to revitalize and restore balance to the body. The BioCharger NG brings forth a convergence of legacy and cutting edge technologies. Unlike traditional subtle-energy machines that degrade or require tuning over time, the BioCharger NG will actually improve and increase capabilities over time. (e.g., sound therapy- built in audio modulation hardware that will allow for streaming of music via the internet and will convert to frequencies to produce subtle-energy music, which will be emitted through the corona discharge. Available in an upcoming software release.)

Cutting edge hardware and software integration enables the subtle energies to be measured, controlled, modulated and transmitted with unprecedented precision, safety, ease of use, repeatability, versatility, and e-ectiveness. The BioCharger NG utilizes four di-erent energy types – Light, Voltage, Frequencies & Harmonics, and Pulsed Electro-Magnetic Fields (PEMFs). As individual energies, each has its fair share of supported research, however the BioCharger NG is the first energy platform of its kind to incorporate all four of these beneficial energies into one platform.

Energy
The BioCharger NG will revitalize your body to perform at peak levels and have you bouncing out of bed.

Recovery
Whether it’s a workout, an injury, stress, or the bumps and bruises of everyday life, the BioCharger NG platform will allow you a quicker bounce-back.

Performance
Getting the most out of your body comes down to e-ort, practice, and the recovery that follows. Just 15 minutes a day with the BioCharger NG can accelerate you toward your new personal best.

Sleep
The BioCharger NG delivers healing energy waves that will realign your mind and body, so you’re prepared to face the day in the morning and ready for bed at night

Flexibility
Just as the BioCharger NG helps to accelerate muscle recovery and reduce sti-ness in joints, it also contributes to improved mobility and flexibility

Light-Not the incandescent light of a lightbulb, but naturally occurring elemental gases that are excited by electrical bombardment to a plasma state. Both visible and invisible light emanates from the BioCharger using excited noble gases: argon, helium, krypton, neon, and xenon. Charged gas particles (plasma) like these are most frequently observed in nature in our planet’s auroras. LIGHT Frequencies and their harmonics found in nature are produced by the continuously occurring electrical discharges in Earth’s atmosphere. The benefits derived from the energy of specific frequencies, frequency ranges, and accompanying harmonic frequencies are all produced indoors on-demand using the BioCharger NG’s powerful and digitally controlled Tesla coil.

FREQUENCIES & HARMONICS- Voltage is supplied by the BioCharger NG, similar to the naturally occurring phenomenon of any lightning storm. Did you know there are over 100 lightning strikes per second in Earth’s atmosphere? Across the globe that’s over 8 million daily transmissions of electric energy averaging 300 million Volts each!